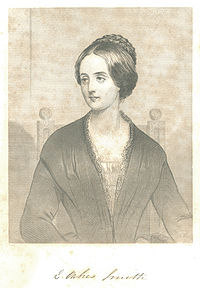 One hundred and sixty-five years ago, Elizabeth Oakes Smith announced to the world that she thought it would be best if society were abolished. The problems with the social order of mankind, were so ingrown, so intractable, that something better and altogether would have to be put in its place.

Oakes Smith’s article “Woman and Her Needs” was published in the New York Tribune, the premiere newspaper of the day, in 1850. In the article, and in the nine issues of the paper that followed, Oakes observed how the structure of society very often prevented women from becoming their true selves. Continuously molded by culture, economy, and family, and a hundred other influences of daily life, it was almost impossible to truly become an individual.

At the time, speaking up for women’s rights was a revolutionary act. Oakes Smith realized this as much as anyone, later remarking in a speech: :”Do you we fully understand that we aim at nothing less than an entire subversion of this existing order of society, a dissolution of the whole existing social compact?” Readers, who had known Oakes Smith mainly as a poet, were surprised to see her take such a strong political stance. Although many of them found her opinions dangerous, when Oakes Smith began to lecture many interested listeners were in attendance.

Ironically, not all members of the women’s right movement agreed with or supported the ideas of Oakes Smith. Two facts explain this, first: Oakes Smith insisted on individuality above agreeing to the ideology of any party of movement, and disagreed with other thinkers on issues such as divorce, which she was against. Secondly, Oakes Smith, although arguing for equality of the sexes also argued that they must express themselves in uniquely masculine and feminine ways .While reformers such as the Bloomerites expressed a concern for women’s rights by scandalously wearing masculine garments, Oakes Smith herself wore traditional clothing, something for which she was occasionally criticized.

Born Elizabeth Prince in Maine in 1806, at 16 Elizabeth she was married to the writer and humorist Seba Smith who was thirty at the time. The marriage was described as happy one despite the age difference, though how exactly her relationship with her family may have shaped her worldview is largely unexplored. Oakes Smith and her husband had six sons and later moved to Brooklyn for Seba’s publishing business. Unfortunately, the business failed, leaving the family in deep financial difficulties. For many years, Oakes Smith would support her family with writing and lectures. In 1859, Elizabeth and Seba moved to Patchogue and are today buried in Lakeview cemetery.

Halloween at the Library!