The Patchogue-Medford Library is pleased to present the solo exhibition, A Visual Essay, featuring the artwork of Kelynn Alder. On display is a series of paintings and mixed media works from the artist’s Immigration and Mexico & Latin America series. Each series delves into the artist’s Latin American roots while calling attention to the challenges, hardships, beauty and charm of those within her Latino community. 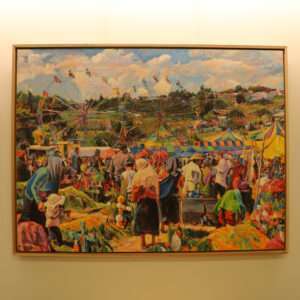 The paintings in Alder’s Mexico & Latin American series are bright and full of life. Many of them capture the array of outdoor street vendors that sell their wares to passerbys. The largest painting on display from this series is Día de los Muertos, Chamula, which depicts the multiday holiday that was established to honor friends and family members who have passed away. The painting captures a particular celebration from Chamula, a highland Mayan town located in Chiapas. The scene rendered by Alder is incredibly vibrant as an array of colors spanning the entire rainbow can be found in the canopies of the various street vendors, the clothing worn by the people and even the chairs found in the two large Ferris wheels. The loose brushwork applied by the artist invokes a sense of liveliness into the scene as the mass of people move in a variety of directions. Upon viewing Alder’s work, one gets a sense that Día de los Muertos is not only a commemoration of the memory of those who are no longer physically present in the world, but a celebration of life as well. 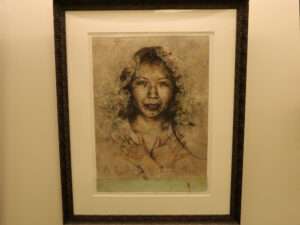 On the opposite wall are a series of mixed media images taken from the artist’s Immigration series. Alder states that “as a daughter of a Mexican immigrant, [her] mature work explores her connection to humanity through her rich cultural ancestry.” But her work not only concentrates on her own heritage, but also the struggles and difficulties faced by those within her Latino community. One such image is Debora Barrios with Monarch, which depicts a woman who sought sanctuary in a church in 2018 as she faced deportation from ICE. Despite being separated from her family and facing a number of legal hurdles, Alder presents Barrios in a stoic manner – with her arms crossed over her body and sealed with a monarch butterfly, a traditional symbol of strength, endurance and rebirth. Alder’s work shines a light on the hardships faced by those in the Latin American community, but also captures the resilient nature of those who are forced to persevere.

Kelynn Alder is a fine artist based on Long Island, NY. She received a BFA from Northern Arizona University and MFA from the School of Visual Arts in Manhattan. She is an internationally recognized artist and has previously exhibited her artwork at the Long Island Museum (Stony Brook, NY), Southampton Arts Center (Southampton, NY) and the Na Bolom Cultural Association (Chiapas, Mexico). She is a co-founder of the Latino Arts Council of Long Island and Artmadehere.org. She regularly teaches free art workshops for underserved communities in Mexico as well as painting classes at the School of Visual Arts. To learn more about the artist, visit kelynnalder.com.

The Claire Davidson Siegel Gallery is an exhibition space in the Patchogue-Medford Library dedicated to exhibiting the artwork of Long Island-based artists and arts organizations. Exhibitions are coordinated by independent curator and art historian, Jay Schuck. If you are interested in exhibiting your artwork in the gallery, we invite you to submit an exhibition proposal. To learn more, visit pmlib.org/display-art.

A Visual Essay, featuring the artwork of Kelynn Alder, was curated by independent curator and art historian, Jay Schuck, and is on display in the Patchogue-Medford Library’s Claire Davidson Siegel Gallery now through November 10, 2022. An Artist Talk presented by Alder will take place at the Library on Wednesday, October 5, from 6:30 – 7:30 PM. All are invited to attend. Register to attend online or in person.